You have two options for writing your in-text citations.

Option 1: Place the author's name and the year of the research publication in parenthesis at the end of the sentence.

Option 2: Cite the year of the research publication in parenthesis right after you mention the author's name or right after a direct quote.

But Keller's (1986) study was completed before widespread use of the Internet.

The American Bar Association (ABA), for example, is concerned about potential plebiscitary pressures on judges and cautions that “we need judges who will tell us what the law is and how it applies in individual cases without regard to what the results of the latest opinion poll are" (ABA 2003, 2).

Or put the citation after the direct quote:

APSA requires that all titles be rendered in Headline Capitalization, regardless of how they appear on the original item.

In Headline Capitalization, these words should be capitalized:

- subordinating conjunctions (if, because, as, that, etc.)

These words should NOT be capitalized:

- coordinating conjunctions (and, but, or, for, nor)

The only exception is if the above three types of words are the first or last word in the title; then they should be capitalized.

"The Rules for Capitalizing the Words in a Title" is correct.

The reference page should be titled References.

References on the reference page should be ordered by author's last name.

The first line of a reference is never indented; every subsequent line is indented two spaces. 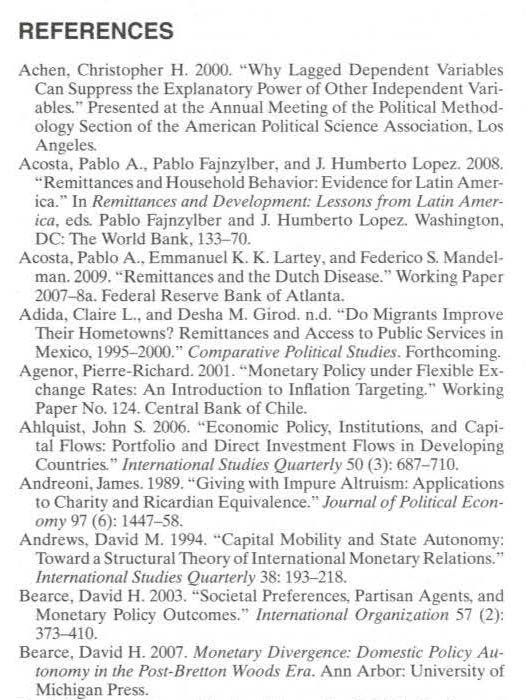 Book citations include these elements in this order:

Note that the first author is always listed as last name, first name.

If citing a chapter in an edited book, add the chapter title before the book title, like so:

Journal Article citations include these elements in this order:

Blondel, Jean, and Nick Manning. 2002. "Do Ministers Do What They Say? Ministerial Unreliability, Collegial and Hierarchical Governments." Political Studies 50: 455-76.

Note that the first author is always listed as last name, first name. Also, in the second example, the (Number) is omitted; this journal does not have issue numbers.

**Journal Articles found in online databases should be cited as these above examples.**

If the newspaper article is an online article, add a URL and the date last accessed, as below:

Aspen Institute. 2009. “Overcoming Short-termism: A Call for a More Responsible Approach to Investment and Business Management.”   http://www.Aspeninstitute.org/sites/default/files/content/docs/pubs/overcome_short_state0909_0.pdf (accessed May 9, 2012).

Double-check your URL to make sure it directs to the resource.

The most recent date accessed is important because web materials can be easily altered; noting when you retrieved the material tells your readers that you may have used a previous version of the document than the one available to them.

For example (taken from Chicago Manual of Style's FAQ page):

When was the webpage last updated?

If the publication year is not apparent, the date that the webpage was last updated will work.

in the address bar and a pop up window will appear with the date and time of the last modification to the webpage.

To cite documentaries or other films, use the following elements and order:

If the documentary or other video clip is freely available online, add a URL after the studio and the most recent date accessed:

To cite a law in APSA, use the following format:

Provide the name of the statute. Date. Source (U.S. Code or Statutes at Large). Volume, section. Page OR url.

To cite a treaty or declaration in APSA, use the following format: