1. The major lexicon of Old Testament Hebrew is the Hebrew and English lexicon of the Old Testament, sometimes called simply "Brown-Driver-Briggs", or BDB, for short (General Collection and REF PJ4833 .B68).  A printing of this keyed to the Strong system is The Brown-Driver-Briggs Hebrew and English lexicon . . . coded with the numbering system from Strong's exhaustive concordance of the Bible, at REF PJ4833 .B68 2010.  To use this, go first to the "Index of Strong's numbers in BDB" beginning on p. 1129, which gives Strong numbers to the left (in this case 1730), and their corresponding BDB page numbers to the right (in this case, 187b (page 187, column b):

From there it is a simple matter of turning to page 187, column b, and scanning that margin for the Strong number in question:

2. The "Concise Hebrew-English dictionary to the Old Testament" that begins on p. 2070 of The Hebrew English concordance to the Old Testament with the New International Version (REF BS1121 .K65 1998) functions as a handy G/K-based key to the Strong system and the BDB lexicon (above), but also to two other Hebrew lexicons as well: 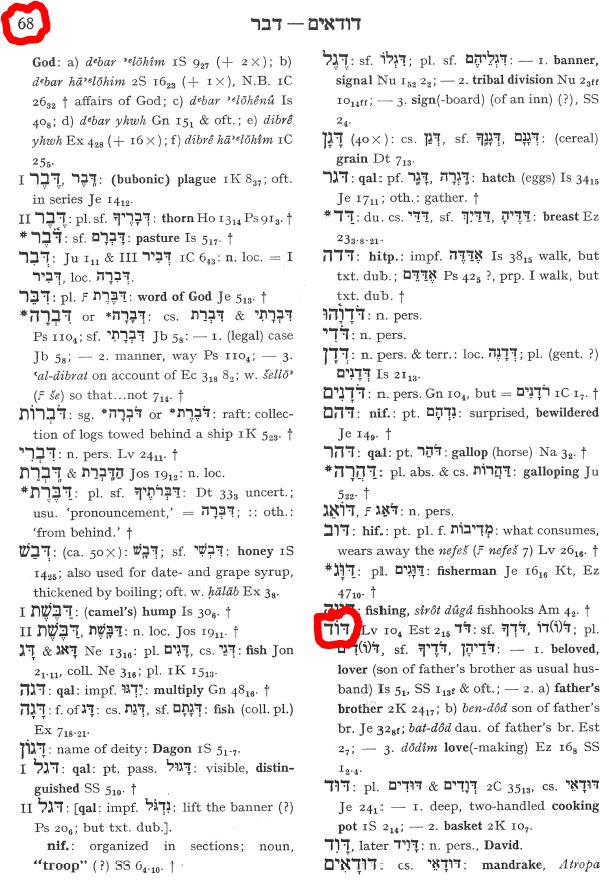 And to the C (or 3rd) quadrant of p. 204 of the Lexicon in Veteris Testamenti libros by Koehler and Baumgartner (REF PJ4833 .K62 1958), which offers definitions in English as well as German: 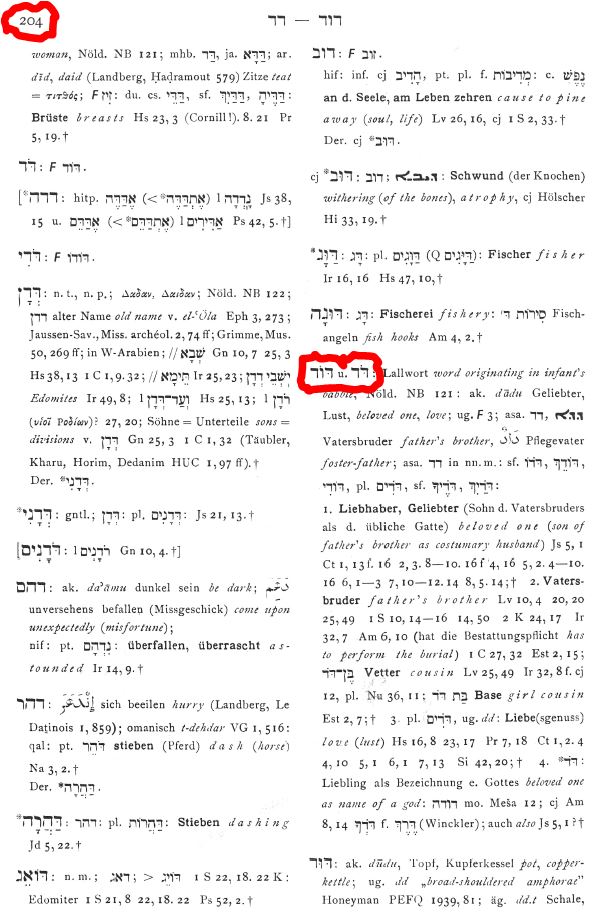 (The Lexicon in Veteris Testamenti libros depicted above predecedes by several decades the updated edition of it translated by Richardson and entitled The Hebrew and Aramaic lexicon of the Old Testament (REF PJ4833 .K5813 2001).  Though the latter is not the one to which The Hebrew English concordance to the Old Testament with the New International Version refers, some use can be made of it with the help of the Hebrew alphabet.  But please don't hesitate to contact Steve Perisho for help.)

3. For additional Hebrew and Aramaic lexicons (including the online Semantic Dictionary of Biblical Hebrew, which remains a work in progress), see the handout Basic English-Bible Reference.

The major theological wordbooks are the following (listed also from p. _ of the handout Basic English-Bible Reference).  One is accessible via Strong numbers, and one via G/K numbers.  To find your way around in the two others (the Theological dictionary of the Old Testament, or TDOT, being the most important of them all) you may need a rudimentary familiarity with the Hebrew alphabet and language, but please don't hesitate to ask me for help.  Here I order them from most to least recent: 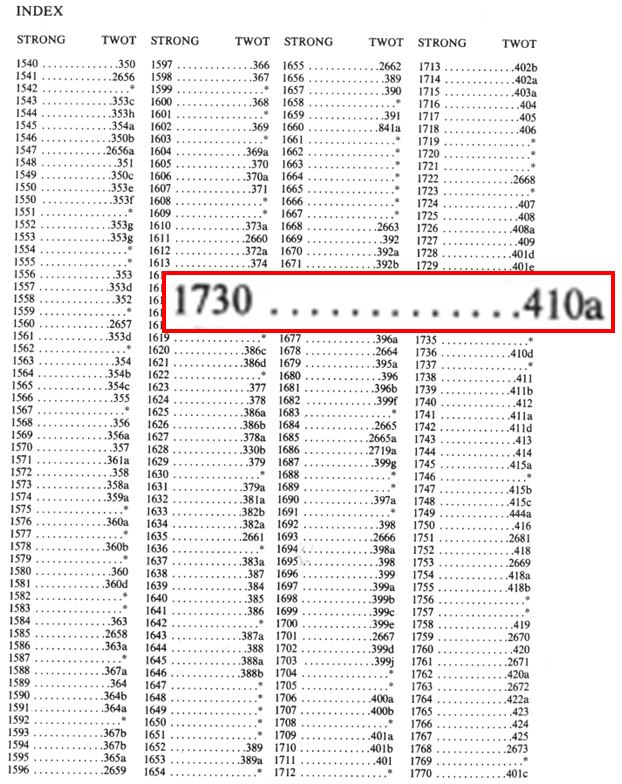 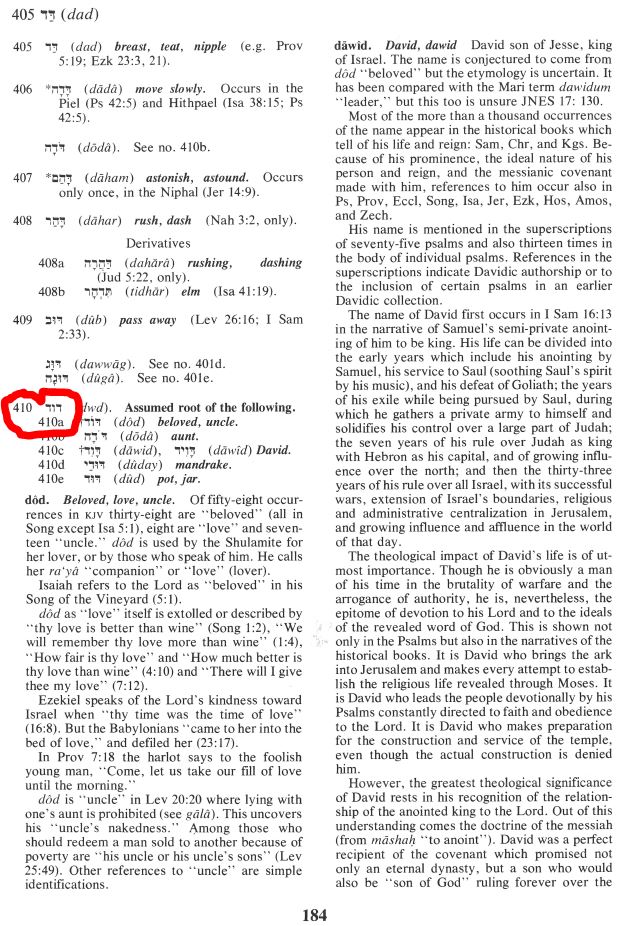 And here I illustrate just one of the several points of entry into the 5-vol. New international dictionary of Old Testament theology and exegesis (REF BS440 .N438 1997).  Start from the "Strong's Numbers -> Goodrick/Kohlenberger Numbers" "Table of Conversion" located on pp. 761-796 of vol. 5, and proceed to the appropriate G/K number in vols. 1-4.  (Note that in addition to the "Numbering System Indexes", vol. 5 contains also an "Index of Semantic Fields", a "Hebrew Word Index", a "Scripture Index", and a "Subject Index".) 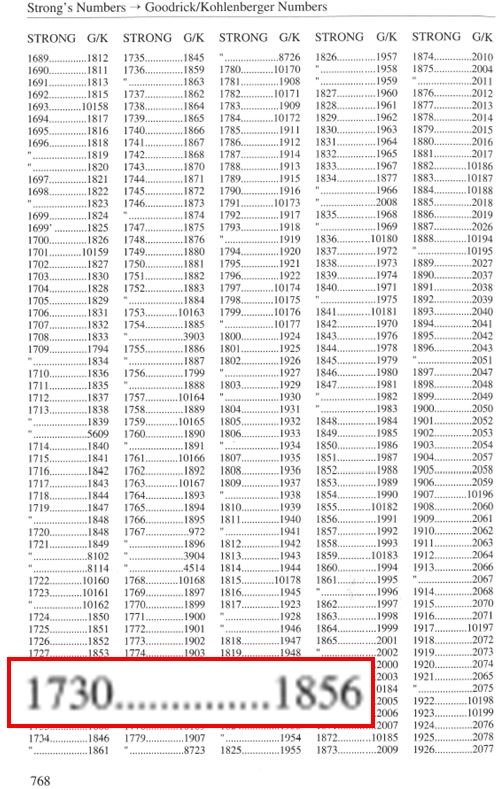 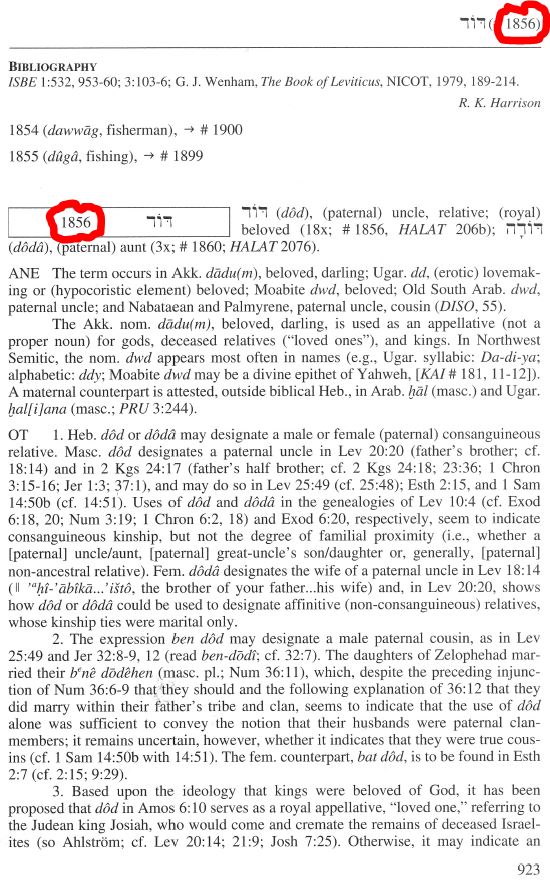 Reference in word-specific bibliography to the corresponding (and usually more substantial) entry in the Theological dictionary of the Old Testament (TDOT): 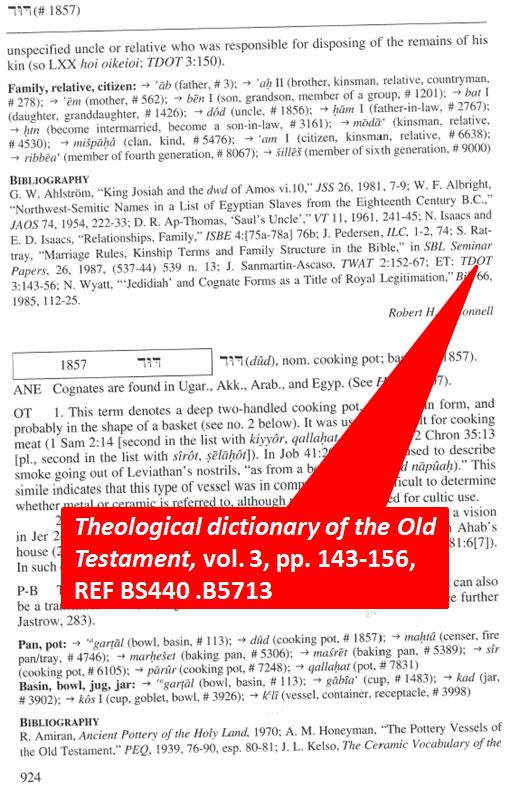 Beyond the (dated) lexicons and theological wordbooks

(which is to say all of the tools listed under 3.3 Identify Monographs & Articles), as demonstrated below (forthcoming):