Many people refer to paraphrasing as putting text "in your own words." But to paraphrase, you must be able to retain the core messages of your text, without relying too heavily on the original author's words. Use this guide to learn how to paraphrase works confidently. 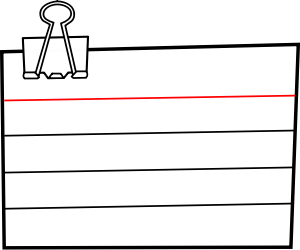 Here are steps you can follow when trying to paraphrase a work.

1) Thoroughly read the passage you intend to paraphrase, ensuring that you have a good grasp on the concepts and ideas it contains. It can be helpful to  highlight or take note of the main ideas in the passage.

2) Put your notes and the original passage away.

3) Now it's time to paraphrase! Write down what you remember to be the main points and any corroborating arguments or statements the author used.

Note: If there is a particular phrase the author used that truly encapsulates their message, you might consider quoting that portion of the text.

4) Now revisit the original passage. Compare your paraphrase to the original text to ensure you covered all the crucial /necessary information.

Find an example of an acceptable and an unacceptable paraphrase from a passage.

Perhaps the most remarkable thing about Graham's childhood and early adolescence was is how unremarkable they really were. The oldest of four children, Graham grew up in the security of a moderately prosperous farm family. Both parents were, from the time of this birth, members of a nearby Associate Reformed Presbyterian Church. This small but sturdy sect was known for its rigorous Calvinist theology, strict rules about Sabbath observance, and tradition of singing psalms instead of hymns. Graham proved and ordinary student neither strikingly good nor strikingly bad. He displayed normal teenage interests, especially, he later suggested girls, baseball, and fast cars.

The oldest child in a fairly well-off family, Billy Graham had a very normal youth. Though both his parents were members of a strict and conservative Presbyterian Church, Graham was an average student and recalls that his teenage interests were "girls, baseball, and fast cars" (Wacker 6).

The most noteworthy thing about Graham as a child and adolescent was how normal he was. As the oldest child, Graham came from a prosperous farming family. His parents small church was known for its strict Calvinist theology, tradition of singing psalms (not hymns), and rigorous Sabbath observance. However, Graham was an average student, neither exceptionally good nor exceptionally bad. His teenage interests were normal, and included girls, cars and baseball.

Why is this paraphrase unacceptable?