Commentaries differ very widely in pitch, difficulty, method, theological orientation,detail, length, quality, and so forth.  Take sheer bulk, for example.  All of the commentaries depicted in the photograph below cover Matthew.  The first (moving from left to right), in a 1-volume commentary on each book of the entire Bible-with-Apocrypha; the second, in a slim one-volume commentary on Matthew alone; the third, in three thick, technical volumes covering the whole of Matthew; and the fourth, in a substantial volume on but three of its twenty-eight chapters (the Sermon on the Mount): 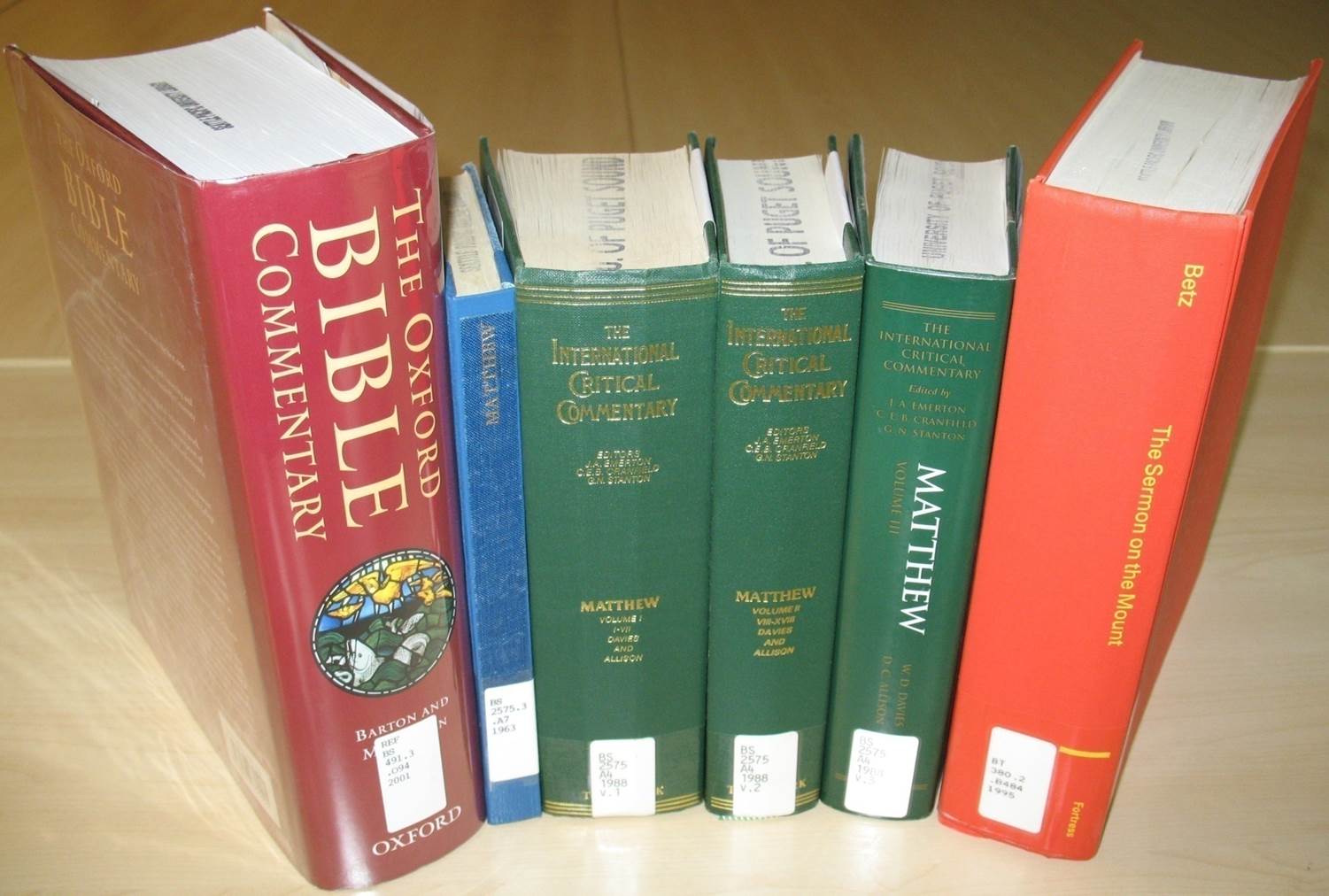 Where to Search for Commentaries

How to Search for Commentaries

Search for commentaries in the Advanced Search area of the Library's discovery system as follows:  [book] AND commentaries (plural) in subject contains: 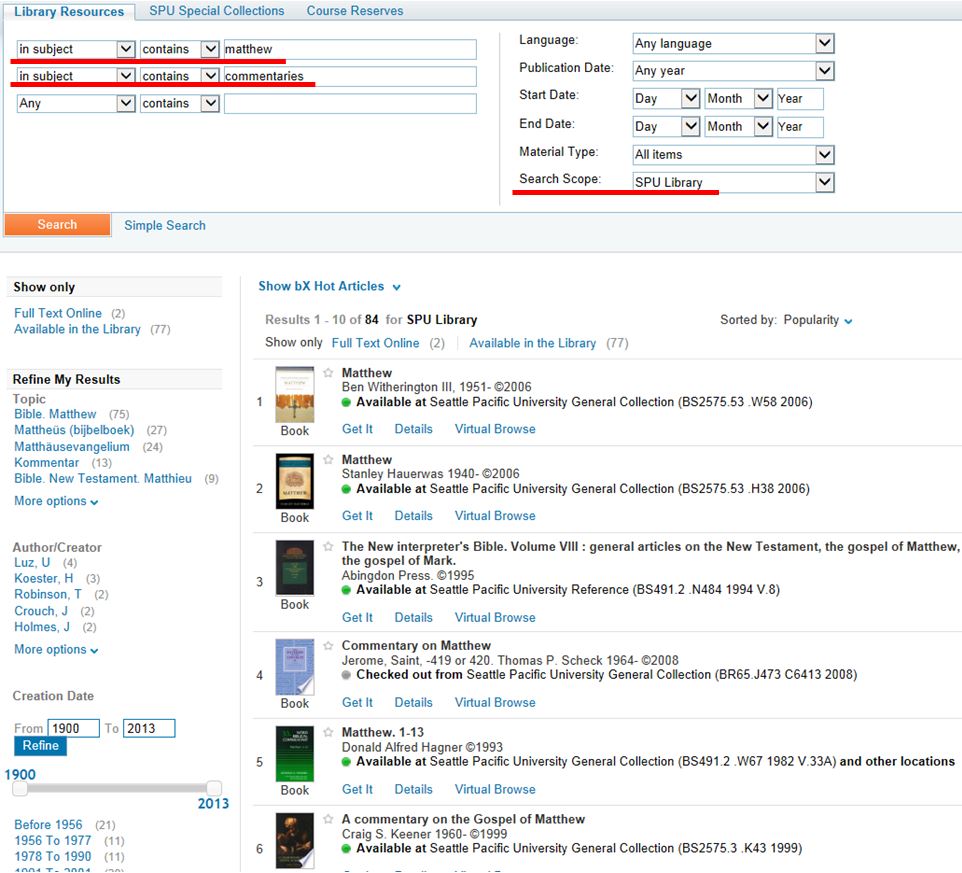 Alternatively, choose the Search Scope:  SPU Library + Summit, and place Summit requests for those not owned by SPU.

Identifying Some of the Better Commentaries

The searches above will return most of the free-standing commentaries on a given book of the New Testament owned (depending on the Search Scope: you select) by either 1) SPU or 2) SPU and the Orbis Cascade Alliance.  But which of these will be the best for your purposes?  To answer that question you are probably going to have to "thumb" through them at (for just SPU) the call number locations or URLs indicated by the Library's discovery system.

That said, lists of especially recommended commentaries exist.  An example of such a list is the one revised annually by Denver Seminary.  Note that this list is divided into three sections at each book of the New Testament, "the first [of which] contains those we consider the best detailed, critical commentaries using the Greek text; the second[,] . . . more mid-level works using the English text (but still with references to the Greek); and the third[,] . . . commentaries that are briefer and/or have a special focus on exposition or application. At least one priority title is asterisked [(*)] for each level."  Here we have selected, in red, the "mid-level" work by Craig A. Evans: 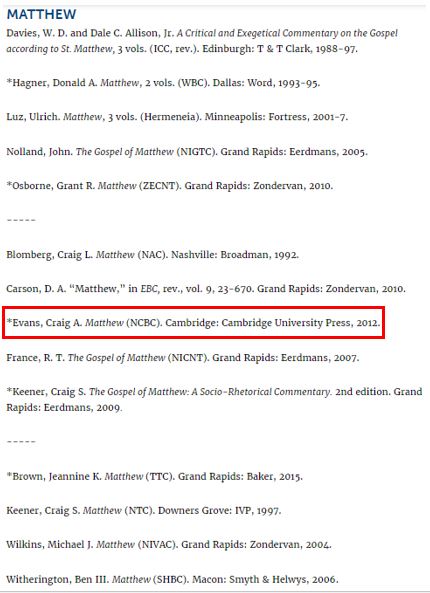 To secure a call number for one recommended commentary in particular, add its author's name to the search described above, as follows:  [book] AND commentaries (plural) in subject contains AND [author] in as author/creator contains: 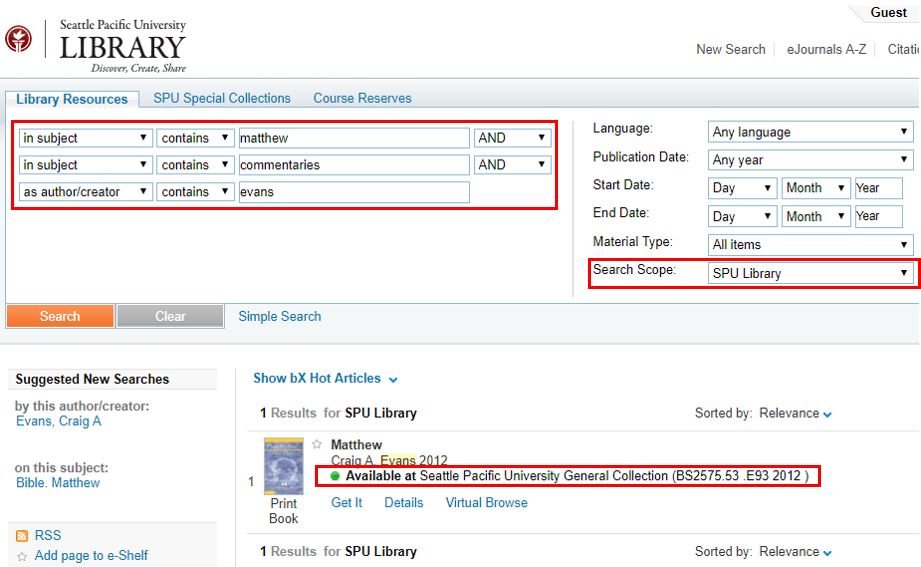 Below is a somewhat longer list of such lists.  Though lists of recommendations like this one tend to finger many of the same commentaries over and over, every such list is ultimately a matter of the judgment of the scholar(s) compiling it, and not bias-free.  For example, the "Selections [of the Denver Seminary list, while not excluding 'works from other perspectives',] are consciously weighted in favor of evangelical scholarship".